Until now the virtual universe is known to be preoccupied with the fight on YouTube, where the fight between Pewdiepie against Indian Music Label T-Series. Until now, it was known that their battle was quite fierce, where Felix’s real name from the PewDiePie had 79 million subscribers followed by the T-Series which had 78 million subscribers. 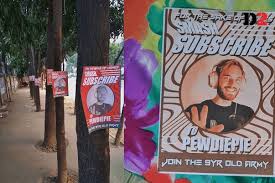 Of course for PewDiePie fans, their role model must stay on top of YouTube with the most subscribers. In many ways, they made an invitation for people to immediately subpoena PewDiePie. The methods are straightforward, there are some who make invitations on their respective social media accounts, and there are also quite extreme ways, where the PewDiePie fans invite to subcribe PewDiePie by hacking.

The hacker has succeeded in taking over more than 65,000 Google Chromecasts around the world. After successfully hacking, they display a video that is 20 minutes long, which of course contains the contents of the account owner to subscribe to the PewDiePie channel.

In the news from The Verge, the hackers revealed that they only wanted to help their favorite YouTuber.

The PewDiePie and T-Series battles themselves are still fairly new. Because of that, finally the meme appears Subscribe to PewDiePie. Of course the meme is an invitation for netizens to immediately subscribe to the PewDiePie channel.
The Nubia Red Magic Mars is the fastest cellphone available today. Is it true that Wolverine cast, Hugh Jackman will appear in theAvengers: Endgame?