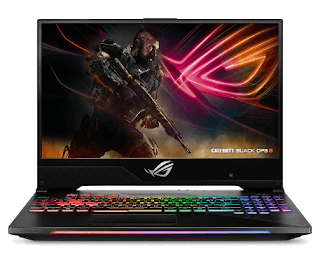 Gamers are certainly familiar with the ASUS Republic of Gamers laptop line from ASUS.

Increasingly adding their laptop portfolios in Indonesia, ASUS has launched ROG Strix Scar III and Hero III, which have very luxurious designs and once gamers. Not only that, this laptop is staying up to have a very powerful performance.

Present in various variants, ROG Strix Scar III is a model that offers the highest choice of specifications between the two. We also had the opportunity to try this one gaming laptop for one week.

Looking at ROG Strix Scar III from a distance, we immediately have the impression that this is not just any gaming laptop. How come? This laptop is surrounded by RGB lights that can change to any color from the bottom of the laptop, keyboard, to the ROG logo on the back.

The number of many RGB lights is quite unusual for a gaming laptop even so that makes ROG Strix Scar III has its own characteristics. For gamers who are lovers of RGB, laptops will certainly immediately attract the attention of anyone who sees it.

The RGB light can certainly be synchronized with other devices that support ASUS Aura Sync. Interestingly, this laptop has a body design that we think is still leaning towards a low profile even though it has that much RGB.

This is probably because ASUS took the BMW Design work Group team to present a modern and futuristic design at ROG Strix Scar III. So from that, it is not surprising that the body reminds us of a sports car.

Even this laptop is equipped with Scissor-Door hinges that have a minimalist footprint and won’t appear when the laptop is closed. Not only that, the ROG Strix Scar III variant that we use has a layer of carbon fiber on the surface of the Palm Rest area so that the hand is more comfortable when on it.

Unlike ROG Hero III which offers four RGB zones, the keyboard from ROG Strix III has its own RGB light for each button. The keyboard itself feels very comfortable when we use typing, probably one of the best gaming laptops we’ve ever tried.

When compared to the keyboard of the VivoBook S14 which we also like very much in the previous reviews, we prefer the ROG Strix III keyboard to type in everyday work.

RECOMMENDED FOR YOU  Best Choice Laptops for Graphic Designers in 2019

RGB lights from the keyboard also have a variety of preset modes that can be selected through Armor Crate settings ranging from Static, Breathing, Strobbing, to Riple. What surprised us was that there was an RGB light animation when the laptop was in a sleep state and connected to the charger.

Under the keyboard, there is a touchpad that certainly shouldn’t be forgotten. The area of ​​the touchpad provided is wide enough so that the fingers can move the cursor more easily. Plus the touchpad can also be changed to NumberPad to make inputting numbers easier.

Not enough there, ASUS also gives another unique thing to ROG Strix Scar III. On the right side of the laptop, there is a unique key called Keystone ROG. This NFC-based key has various uses that can be used by gamers.

Keystone ROG can save settings and presets used on Armor Crate. By simply entering the Keystone ROG, the settings will be activated immediately so you don’t have to re-arrange them one by one.

In addition, Keystone ROG can also be used as a key to activate Shadow Drive. As the name implies, a new Shadow Drive will appear when the key is installed and will automatically disappear if the key is revoked. This feature will definitely be very useful if you have confidential data that no one should see.

The design that reflects the soul of the gamer and is full of features is certainly not the only advantage possessed by ROG Strix Scar III. In order for the gaming experience to feel perfect, ASUS provides a screen with a 144 Hz refresh rate and a 3ms response time.

The highest variant of the ROG series Strix Scar III even offers a screen with a refresh rate up to 200 Hz, of course with specifications that can compensate.

The IPS panel used has a 100% sRGB color coverage so that the resulting color becomes more accurate. That way users can be more enjoyable when playing games because each movement looks much smoother and feels more immersive.

In order to make maximum use of the screen’s capabilities, ASUS also pinned very powerful specifications in it. The ROG Strix III G531GV variant that we use is equipped with an Intel Core i7-9750H which has 6 cores and 8 threads.

Also, do not miss the 16GB Single-Channel DDR4 RAM (up to 32GB maximum) to meet today’s application needs and NVIDIA GeForce RTX 2060 GDDR6 6GB VRAM graphics card as the main weapon in running a game.

This combination makes ROG Strix Scar III able to bulldoze all types of games including if you want to while even streaming. Performance resilience can be seen from the results of high scores from various benchmark applications.

In order to make the performance more optimal, ASUS also pinned a storage capacity of 512 GB NVMe SSD so that the operating system boot process and game loading became much shorter compared to HDD storage in general.

As a result, using this laptop in everyday life feels very satisfying. The computing activities that we do are free from the name lag, especially with the 144 Hz screen providing a more comfortable experience thanks to the smoother movement of the cursor and Windows animation.

We did not experience any problems at all when opening a large number of browser tabs while listening to Spotify and playing 4K resolution videos simultaneously.

Intrigued by ROG Strix III gaming capabilities? With specifications like that, we certainly have high expectations. Moreover, this laptop has been armed with Intel’s 9th generation processor and RTX graphics card.

With such high performance, the problem of hot temperatures is certainly a scourge that cannot be forgotten. Fortunately, the cooling system embedded in ROG Strix Scar III is able to keep the temperature within reasonable limits so that the components can work optimally.

It’s just that the sound of the fan sounds pretty loud when running on Turbo mode which might be a little annoying. No big deal because indeed this is a very reasonable thing found on high-end gaming laptops.

With such powerful specifications, ROG Strix Scar III has a battery life that is quite decent when used under normal conditions. From the trial using PCMark 8 Work which simulates the activity of office workers, this laptop can be lit for 2 hours 26 minutes.

This number is slightly above the average gaming laptop in general. Therefore it does not seem to be a problem if you want to use this laptop to pass a class of lectures even though the user must be eager to find a power outlet. For charging the power itself takes almost 2 hours from 11% to fully charged.

After trying it directly for several days, we had difficulty finding the weaknesses of ROG Strix Scar III because it was almost close to the perfect word. High performance for playing the latest AAA games, captivating designs that reflect the soul of gamers, and various advanced features are the main strengths of this ASUS laptop.

Not only that, both the screen and the keyboard presented also provide an amazing experience. Therefore this laptop can not only be enjoyed by gamers but also content creators to graphic design students.

ASUS TUF Gaming FX505 is the latest gaming laptop product from the line that is quite attractive for the Indonesian market.

For those of you who are looking for a powerful gaming laptop and have an affordable price, ASUS has presented the latest series of TUF Gaming FX505 that are very interesting to consider.

The TUF Gaming Series is a line of gaming laptops introduced in 2018 and replaced the FX Series. Unlike the Republic of Gamers (ROG) line that focuses on providing the highest specifications currently and the latest investment, TUF Gaming strives to offer the best gaming experience possible at a more affordable price…

Samsung released a lot of smartphones in 2019, one of which is the Galaxy A20.

Through the lines of the Galaxy A series and M series, Samsung feels like it’s trying to present a variety of smartphone models that target different segments. Likewise, the Galaxy A20 is the main attraction for lower-middle-class smartphones that are still dominated by vendors such as Xiaomi, until the newcomers are real…