OPTIC AXCESS — Now gaming devices are increasingly popular in the world because of the increasingly high public enthusiasm for the gaming world.

Not only to play as a hobby but now the game has also been played professionally in all countries. This is proven by the number of professional game players from all countries who have penetrated and won international matches. 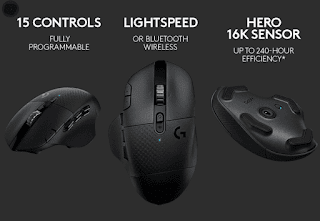 For this reason, Logitech through the gaming brand Logitech G launched its latest wireless mouse called the G604 LIGHTSPEED. This product is designed for users who like games or professional gamers with all-purpose gear needs that can perform a variety of tasks.

Ujesh Desai as Vice President and General Manager of Logitech Gaming said that this device has six buttons so that users can maximize the game and complete each game with maximum control.

In addition, the Logitech G604 LIGHTSPEED is also equipped with the exclusive technology features of the Logitech G LIGHTSPEED Wireless series for interference-free connections while gaming is in progress, such as the 16K Hero sensor.

This sensor can maximize gameplay precision and improve efficiency by zero smoothings, filtering, or accelerating movement so that users feel responsive character movements in the game.

Besides being able to use a wireless connection, the user also changes the Logitech G604 LIGHTSPEED settings to a Bluetooth connection by pressing the button that is available to switch to connect to other devices that use that connection.

Logitech claims that the wireless mouse with one AA battery can last more than 240 hours with high performance when playing games using a LIGHTSPEED Wireless connection or 5.5 months when using a Bluetooth connection.

Customization settings from Logitech G604 LIGHTSPEED itself can be done using the Logitech G Hub Gaming software. With the features and specifications offered, the G604 LIGHTSPEED can be one of the gears needed when users play casual or serious games in the tournament.

Logitech G Releases 3 Gaming Mice with 16K HERO Sensor As a large company of computer devices and accessories, Logitech has a brand for gaming…