It turns out that Huawei still has one more Nova 5 series smartphone launched today in China under the name Nova 5z. This smartphone comes with hardware specifications that compete in the middle class.

This can be seen from the use of the Kirin 810 Octa-Core chipset that is accompanied by 6 GB or 8 GB RAM. While internal storage is available in two choices consisting of 64 GB or 128 GB. 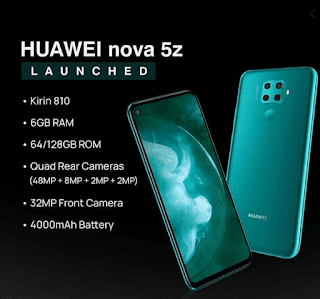 This hardware combination has a powerful performance for middle-class smartphones so it runs smoothly in applications. GPU Turbo feature has also been embedded in it which can improve GPU performance and reduce power consumption when the game is being played.

The battery capacity of 4,000 mAh which is present on this smartphone is claimed Huawei is able to last a full day with normal use. While the 20W Fast Charging feature that is present in it is able to charge the battery very quickly.

The superwide rear camera is capable of producing photos that have a wide area complete with distortion correction features to make it look more proportional. While the main and secondary cameras are able to produce photos with bokeh (blurred background) effects instantly.

This smartphone default camera application is equipped with a Super Night Scene feature that can produce nighttime photos with brighter and less noise compared to using Auto Mode.

The four rear cameras themselves are positioned in the form of a Matrix-like Mate 20 Pro. While the front camera has a resolution of 32 MP that can pamper users in taking selfies with a smooth face. Moreover, there is also a Portrait Night feature that is able to produce bright selfie photos at night.

The screen has a width of 6.26 inches with Full HD + resolution (2340 x 1080 pixels) and a design that meets the front. Huawei replaced the Nova 5z bangs with the presence of a punch hole on the upper left side.

Not to forget, support for two SIM cards, fingerprint sensor on the back, Face Unlock, Bluetooth, WiFi, USB Type-C port, 3.5mm audio jack port, and EMUI 9.1 based on Android 9 Pie are already present in it. This smartphone comes with two variants consisting of: