This smartphone comes with a powerful and battery-efficient Qualcomm Snapdragon 675 Octa-Core chipset thanks to 11nm fabrication technology. This chipset is also used by Vivo Pro V17 as a power. 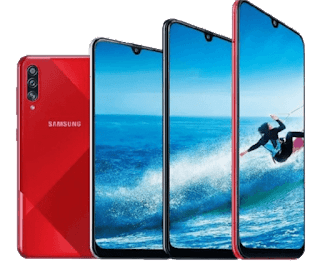 AI Game Booster has also been present in it which allows increased performance when the game is run. If the internal capacity is not enough, you can add microSD up to 1 TB.

The 4,500 mAh battery that is present in this smartphone is claimed to be able to last for 1 full day in normal use. The 25W Fast Charging feature present on this device allows fast battery charging.

Goto the camera, the Samsung Galaxy A70s has been equipped with three rear cameras that have a main camera configuration of 64 MP, 8 MP ultra-wide camera, and a 5 MP secondary camera.

The combination of the main and secondary camera is able to produce photos (blurred background) instantly. While the ultra-wide rear camera is capable of producing photos with a large area up to an angle of 123 degrees.

The front camera itself has a resolution of 32 MP plus the AI ​​Beauty feature that can produce selfies with a smooth face. For the screen itself has a width of 6.7 inches with Full HD + resolution (2400 x 1080 pixels), Super AMOLED technology, and protected by scratch-resistant glass Correction Gorilla Glass.

Read Also: How to screenshot on the Samsung Galaxy Note 10 with ease

The screen uses the Infinity-U design with a 20: 9 aspect ratio that fills the front complete with waterdrop-shaped bangs at the top. Thanks to the use of Super AMOLED, this smartphone’s fingerprint sensor is located inside the screen.