OPTICXCESS — Infinix Hot 8 has a complete package of present-day entry phones, from a large screen start, a powerful camera, a jumbo battery, to the features that are no less attractive to smartphones from other vendors in its class.

In general, all of these can be clear images of the advantages and disadvantages that accompany them. For those of you who don’t know yet, I’ll try to keep it one by one. 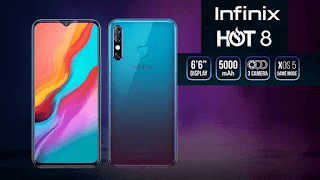 Just like most mobile phones, the Infinix Hot 8 device is equipped with a jumbo battery as its flagship. The device has a 5,000 mAh battery that the developer’s claim can be used for up to four days without connecting the charger.

Moreover, Infinix Hot 8 also features a 6.6 inch IPS screen that is more battery efficient, as it has the smallest resolution for today’s mobile phone, HD + (1,600 x 720 pixels). For those who do not know, the smaller the resolution then the smaller the power consumption needed to turn on the screen.

The good news, this SoC is not only more power-efficient but also powerful enough for an entry class phone, which is certainly not so focused on gaming. MediaTek Helio A22 and MediaTek Helio P22 already carry specifications that do not lose time.

Thanks to these two SoC, Infinix Hot 8 can also use a trio camera configuration – A camera with three lenses – with a 12 MP lens configuration coupled with a 2 MP secondary camera and a QVGA camera.

With this camera configuration, Infinix Hot 8 can be used to take better pictures and can meet a wide range of user needs, including to take pictures set in Bokeh.

The no less interesting, the devices been offering fingerprint scanner sensors as well as face unlock features that can secure data, applications, and user privacy.

The Disadvantages of Infinix Hot 8

Unfortunately, with some advantages but the low-priced official, Infinix Hot 8 has some drawbacks that can be considered before drinking it.

Infinix Hot 8 still uses the usual charging feature for its large battery. Despite being claimed to be fast charging, the charging in Infinix Hot 8 can only operate up to 2A which can charge up to 3 hours based on Infinix data.

In addition, Infinix Hot 8 also has not been equipped with any protector, either for the device as a whole or the screen, whereas the next-door neighbor has included a protector such as P2i Nano coating and Gorilla Glass.

The charging and data transfer interfaces that still use Micro-USB are also an additional record, especially because of the flexibility that is not better than the more modern USB Type-C.

AMOLED vs OLED Screen, which one is the best?