The miners extract salt from salt deposits and process it into tiny crystals while sea salt comes from evaporating seawater. Many people believe that sea salt is healthier than table salt because it is a natural source of sodium. 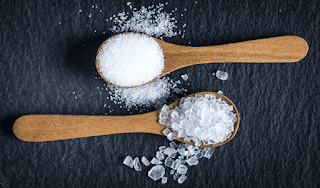 Kitchen salt is produced by the factory by removing magnesium, calcium, and potassium. But the factory also adds iodine to table salt which is a vital component for thyroid hormone production.

Sodium is an important nutrient obtained from the addition of salt and processed food. Doctors recommend limiting salt on the diet because too much sodium intake can contribute to dehydration and heart disease. High blood pressure is also one of the main problems.

Sea salt contains other minerals namely magnesium, calcium, and potassium. While table salt does not contain these three minerals but contains iodine.

Sodium is important for health so it is not recommended to eliminate it from the diet. Sodium in salt helps control blood pressure and is needed for nerve and muscle function.

Sodium consumption is also needed for normal cell function and maintains acid balance in the blood. Kitchen salt contains iodine which is an important nutrient. Iodine-deficient individuals have the potential to suffer from goiter and various other symptoms.

Iodine deficiency can cause slow growth and disruption of cognitive development in children. Only table salt contains iodine because unprocessed sea salt does not contain iodine.

Too much salt can affect health conditions including high blood pressure, heart disease, strokes and heart attacks. Apart from this, every individual needs to consume the right salt intake in their diet to get their health benefits.

The highest salt consumption is obtained not from the addition of salt in home-cooked food. But from processed foods consumed. In addition, it is necessary to be aware of the high salt content in cheese, bread and poultry products.

The American Health Association (AHA) recommends consuming less than 1500 mg of salt per day. Dietary Guidelines in the United States recommend limiting sodium to less than 2,300 mg per day for adults and children over the age of 14 years.

The maximum amount of sodium intake for children under 14 years depends on their sex and age.

OPTICXCESS — Not only animal products must be treated carefully to prevent the spread of disease. In fact, fruits and vegetables also need special handling…

Table of Contents 1. Lemon and Ginger2. Mint and Watermelon3. Sage, Pineapple, and Raspberry4. Oranges, Strawberries, and Pineapple5. Mint, Lemon, and Cucumber OPTICXCESS – It…