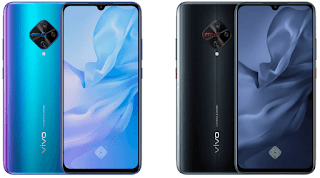 Do not forget, support Quad Camera or four rear cameras become one of the mainstay features of this device because it has a main camera with a large resolution reaching 48 MP. With this feature it offers, can Vivo S1 Pro compete with other middle-class devices?

Following current trends, the Vivo S1 Pro comes with a full screen plus bangs shaped like water drops. While on the back there are 3D arches on the left and right so comfortable when held. The rear body also has two color choices, namely Glowing Black and Crystal Blue which produces attractive colors when exposed to reflection.

For the record, I got a Vivo S1 Pro unit that has a Glowing Dark color. Although the rear body has a beautiful color, dust and fingerprint stains easily stuck so that you should immediately embed the additional casing available in the sales package.

Still, on the back, there are four rear cameras inside Diamond Shape that make it look unique. Turning to the bottom, there is a USB Type-C port and speaker hole. Towards the top, there is a 3.5mm audio jack port.

Furthermore, on the right, there are volume and power buttons arranged vertically while on the left there are SIM and microSD card slots.

Right above the screen, there are bangs shaped like drops of water that serve to store the front camera. The Eye Protection feature has also been embedded in this product that can protect the user’s eyes from the blue radiation produced on the screen.

RECOMMENDED FOR YOU  Review Samsung Galaxy A20

To further save the battery, the Vivo S1 Pro is also equipped with an Always-on Display feature that will display the time, date, battery capacity, and application notifications when the screen is at rest. 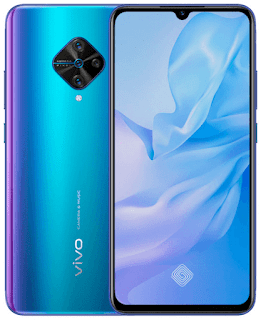 The main camera is capable of producing photos with a resolution of 48 MP that has good detail. While the combination of the main and secondary camera is able to produce bokeh photos (blurred background) instantly. Ultra-Macro cameras can produce close-up photos up to 4cm which are suitable for miniature photos, flowers, small toys and much more.

There is also an AI Scene Recognition feature that can intelligently determine the best scene when an object is being shot using the back camera. Turning to the front, there is a 32 MP resolution camera plus an AI Beauty feature that can produce selfies with a smooth face.

The hardware, Vivo S1 Pro has been equipped with Qualcomm Snapdragon 665 Octa-Core chipset, 8 GB RAM, and 128 GB internal storage that is claimed by Vivo to be able to deliver powerful performance to run applications or games.

To prove this claim, I run various daily applications ranging from telephone, SMS, music player, email, social networking, document editor, and video player. The result, Vivo S1 Pro is able to run these applications smoothly without lag thanks to the presence of 8 GB of RAM.

We also tested the performance by using the AnTuTu Benchmark v8.0.4-OB, Geekbench 4 and Geekbench 5 applications. As a result, this smartphone was able to get a high AnTuTu score which reached 179,774 points. 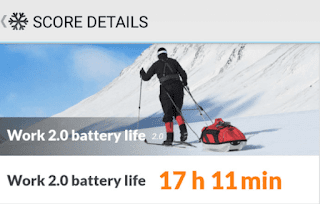 The power source of this smartphone is entrusted to the 4,500mAh battery capacity. With this much capacity, Vivo claims that the battery can last a full day in normal use, 11.8 hours to play games, or 15.4 hours to play videos.

To prove this claim, I run the PCMark for Android application with a battery condition starting at 100%, a brightness level of 50%, and a Work Mode 2.0 Battery that will simulate daily use activities.

This smartphone allows up to 5 different fingerprints to be read by a fingerprint sensor. Not to forget, the Face Unlock feature has also been pinned on this product that allows the use of a screen lock using only the face. When I point my face at the front camera, Vivo S1 Pro detects it right away and unlocks the screen.

Even in low light conditions, this Face Unlock feature is able to recognize my face quickly. This can happen because the screen brightness level is increased so that the face is scanned by the camera. In addition to unlocking smartphones, fingerprint sensors and Face Unlock can also open applications or folders that are locked with the default feature of Funtouch OS. 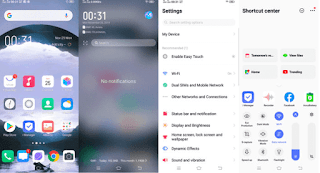 Meanwhile, if you sweep the screen from the bottom up, the Quick Settings will open. By default, Funtouch OS 9 does not have a drawer so installed applications will automatically be found on the home screen. Apart from that, you can uninstall the application directly from the home screen.

If you move the home screen to the leftmost part, Jovi Smart Scene will appear that will show the weather, news, tips, application shortcuts, and much more.

Furthermore, I myself often use the mainstay features of Funtouch OS 9 such as 3-finger screenshots, dual-split multitasking, and App Clone. I can take screenshots quickly on this device just by sweeping the screen from the bottom up using 3 fingers pressed together.

For dual-split multitasking, I can run two applications at the same time on one screen. So that we can activate this feature, we can sweep the screen from top to bottom using 3 fingers pressed together. Finally, App Clone allows me to run two social media accounts at the same time because the application can be cloned into two.

There is no NFC
Fingerprints and dust stains easily stick