OPTICXCESS — Samsung Galaxy S11 + reportedly appears on the Geekbench website. The smartphone, which is reportedly going to be the latest flagship of the South Korean company, will certainly launch with the Exynos 9830 chipset. 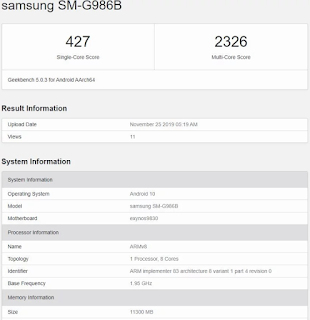 In the Geekbench page, it was revealed that the Galaxy S11 + will come with 12GB of RAM. This is in line with the maximum capacity of the Galaxy S10 +. But it is not certain, whether a version with 8GB of RAM will be available.

This smartphone with SM-G986B code has a score of 427 for single-core and 2326 for multi-core testing. In it, there is the Android 10 operating system and is rumored to be present with One UI 2.0.

To note, based on data that appeared in Geekbench, the results of the Samsung Galaxy S11 + single-core test turned out to be lower than the Exynos 9825.

So far, the Exynos 9830 specifications themselves are still not known with certainty. This chipset is strongly suspected to be present with two clusters, each containing four cores. This chipset must be able to show increased performance to be able to support a 120Hz screen. Not only that, but this chipset also has to support a 108MP main camera sensor and 48MP telephoto with 10x optical magnification and 100x hybrid zoom. Because the Galaxy S11 + was previously reported to be present with these features.

OPTICXCESS — Samsung reportedly will introduce the latest flagship, Galaxy S11 on the third week of February 2020. This smartphone is claimed to be present…

Samsung Galaxy S10 Plus Ready to Bring 12GB RAM and 1TB Storage In 2018 ago, the world was shocked by the Lenovo Z5 Pro GT…

OPTICXCESS – Oppo A91 Geekbench Score Leaks. There has recently been a leak from Geekbench testing related to the upcoming Oppo smartphone. Reporting from Gizmochina…