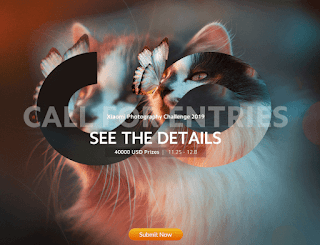 Photographs sent in this competition must be the original work of the participant using the camera of the Xiaomi smartphone.

This skills competition is held from 25 November 2019 at 00:00 WIB until 5 February 2020 at 23:59 WIB. Whereas the Task-Based Prize Giving invites participants to vote on the photo they like and complete the assignment specified by the organizer.

The Task-Based Prize Giving will start from November 25, 2019, at 00:00 WIB until January 3, 2020, at 23:59. Both parts of this competition can be joined by Xiaomi smartphone users who have Mi accounts and have downloaded the Mi Store Android application to upload photos at the competition.

The first stage of the Skills Competition will have four categories consisting of See the Details, See the Nights, See the Season, and See the Faces. Later the committee will select participants’ photo results to enter the top 40 of the world in the second stage.

After judging the photos of the top 40 in the second stage, Xiaomi will announce the winners on February 5, 2020, on their Facebook page and official website. Furthermore, the committee will contact the winner on February 8, 2020, to get the data needed to give the prize.

While there are also jury choice awards based on the second stage of the world’s top 40 with 10 Mi Note 10 smartphones for 10 winners. While the prizes for the Task-Based Prize Giving competition will get a discount coupon for each winner.

You could say the Photography Challenge 2019 competition is quite interesting to be followed by your Xiaomi smartphone users who love the world of photography. For that, for those of you who want to find out more information about this competition, you can visit the official website Here.

OPTICXCESS — Samsung reportedly will introduce the latest flagship, Galaxy S11 on the third week of February 2020. This smartphone is claimed to be present…

Install Google Camera on Xiaomi Mi A3 – Xiaomi Mi A3 continues Android One from Xiaomi, after Mi A1 in 2017 and Mi A2 and…

OPTICXCESS — Redmi 8A Specifications with 4GB RAM and 5,000 mAh Battery Revealed After the Redmi Note 8 and Redmi Note 8 Pro was released,…