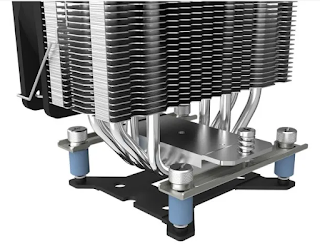 OPTICXCESS — If you are planning to buy the latest CPU Cooler which is quite superior in terms of cooling, then the latest Air Cooler ID-COOLING SE-224-XT Basic might be your next ideal answer.

This series has just been announced, and manufacturers claim that the performance offered can be far better. The SE-224-XT Basic CPU Cooler itself comes with 4 direct-touch copper heat pipes, a 120 mm PWM fan and a fairly new mounting mechanism.

ID-COOLING itself says that this CPU Cooler is designed to cool processors with a TDP below 180 W. As for size, this series has dimensions of 120x73x154mm and is basically compatible with almost all standard ATX casing options.

Well, the best thing, the default 120x120x25mm Fan is also included with 8 pcs rubber absorbers at all angles, especially on both sides. As for performance, the Fan is able to run at 700 to 1800rpm with PWM support while pushing air 76.16CFM at maximum speed.

The noise level is measured between 15.2 to 32.5 dB (A). An additional set of fan clips is included for push-pull configuration. The bundled thermal grease is named ID-TG25, which has a thermal conductivity of 10.5 W / m-K.

For the price, ID-COOLING ID-COOLING Basic has an MSRP of 27 USD (before tax) and will be available in early December this year, although the certainty has not been revealed.