There has recently been a leak from Geekbench testing related to the upcoming Oppo smartphone. Reporting from Gizmochina (12/19), this smartphone came up with the code name Oppo A91 PCPM00 which managed to score 1479 in single-core testing and 5733 in multi-core testing. This smartphone is also known to have run the Android 9 Pie operating system. 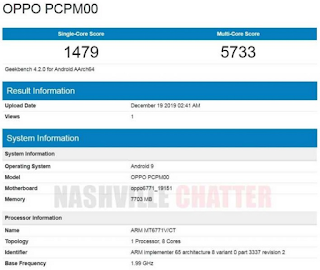 Previous leaks have also revealed that the Oppo PCPM00 will display a Full HD + AMOLED 6.4-inch screen and has a fingerprint scanner on the screen. This possibility is provided with the same 3.0 in-display fingerprint sensor technology as Reno 2. In addition, the screen will also offer an aspect ratio of 20: 9 and a battery capacity of 4,025 mAh.

Reportedly this smartphone will also be equipped with up to 256GB of internal memory and supports a microSD card slot for more storage. For the front camera will be 16MP resolution and equipped with four rear cameras. It is estimated that the four cameras will each have a resolution of 48MP, 8MP, 2MP, and 2MP.

As for the design, it will be present quite sleek with a thickness of 7.9 mm and display a waterdrop notch on the screen. The rear body will also appear with a gradient design. It seems we still have to wait a while longer to get more leaks regarding this upcoming Oppo smartphone.

OPTICXCESS — a few months ago, OPPO has presented an affordable middle-class smartphone called OPPO K3 in several countries. With a price of Rp 3…

OPTICXCESS — OPPO A52 Launched 5,000 mAh battery and Snapdragon 665 Octa-core. After the stealth of OPPO A92 coasting in China, OPPO is now rumored…

OPTICXCESS — Redmi 8A Specifications with 4GB RAM and 5,000 mAh Battery Revealed After the Redmi Note 8 and Redmi Note 8 Pro was released,…

OPTICXCESS — Samsung Galaxy S11 + reportedly appears on the Geekbench website. The smartphone, which is reportedly going to be the latest flagship of the…