Home » Rare Diseases That Affect Adolescents in Canada Due to Vape, Lung Popcorn.

OPTICXCESS — Vape-type electric e-cigarettes lately claimed many lives, especially teenagers in the United States. The latest news from Live Science states that a teenager in Canada has a rare disease due to vaping. Popcorn lung is a rare medical condition in question because it is indeed a teenager’s lungs like popcorn.

Based on existing reports, this 17-year-old teenager who used vape in the past 5 months has the potential to become the first vape victim to this type of popcorn lung medical case. In fact, it is also known, after buying vape online, he added tetrahydrocannabinol or THC to the vape liquid. 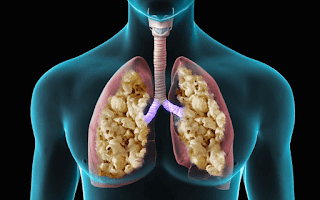 Before long, the symptoms of a severe cough followed by fever and difficulty breathing made this teenager immediately rushed to the hospital. Because the situation is serious, blood pumping must pass through the artificial lungs that are outside the body. Initially, doctors suspected that this teen had bronchiolitis or inflammation of the smallest airways in his lungs.

And then, the doctor’s diagnosis stated that he had lung popcorn, which is another term for bronchiolitis obliterans. So according to the National Institutes of Health, the smallest airways in the lungs of adolescents have indeed been inflamed and damaged due to so often inhaling chemicals.

The chemical that the worker breathes constantly is diacetyl, which is a flavoring material for artificial butter and is indeed a chemical that is always used in making popcorn, a number of dairy products, caramel, and fruit drinks. In addition to chemicals, there are several other factors that need to be considered as triggers for popcorn lung disease:

In general, the onset of symptoms of popcorn lung disease is approximately 2-8 weeks after exposure to particles, smoke or hazardous chemicals. Some common symptoms that are most likely to occur as a sign of popcorn lung are:

Often when a symptom sufferer checks himself to find out the cause, there must be an error in the results and the doctor thinks the patient has emphysema, bronchitis or asthma. That is why, it is important to take a CT scan, biopsy, and lung function examination so that the diagnosis of lung popcorn can really be ascertained.

Unfortunately, until now there has been no specific drug that can cure this disease, as for treatment aimed at reducing symptoms and slowing the progression of the disease. Corticosteroids are the drugs most often given to patients, along with immunosuppressant therapy so that the body’s immune response is reduced, as well as supplementation of oxygen, cough medicines, and bronchodilators.

In the case of a teenager in Canada earlier, because the condition was already severe and terrible, he needed to spend time in hospital treatment for 50 days then continued at home for recovery afterward. After a condition that made him have chronic airway damage, he no longer continued to use tobacco products let alone e-cigarettes.

OPTICXCESS — Not only animal products must be treated carefully to prevent the spread of disease. In fact, fruits and vegetables also need special handling…

Table of Contents 1. Lemon and Ginger2. Mint and Watermelon3. Sage, Pineapple, and Raspberry4. Oranges, Strawberries, and Pineapple5. Mint, Lemon, and Cucumber OPTICXCESS – It…