The OPPO K5 comes with a race kitchen entrusted to the powerful Qualcomm Snapdragon 730G chipset thanks to the 8nm fabrication technology. While the GPU Adreno 618 present on the chipset is able to cope with the graphics well. 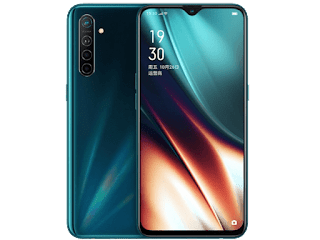 OPPO has also introduced the HyperBoost 2.0 feature that improves hardware performance when the game is running. Users can activate this feature if the game or app has been inserted into the Game Space folder.

Battery 4,000 mAh that is present on this device is claimed OPPO is able to survive for 1 full day in normal use. Interestingly, the OPPO K5 has been equipped with the features of VOOC Flash Charge 4.0.

With the presence of this feature allows charging the battery can run quickly from the condition 0% to 100% in just 73 minutes. Arguably this technology has improved compared to VOOC Flash Charge 3.0 which can charge the full battery within 80 minutes.

Thanks to the use of AMOLED technology, creating a fingerprint sensor can be embedded in the inside of the screen. While Face Unlock feature is also presented on this device so it can make the user unlock the smartphone using the face.

The main camera uses a Samsung GW1 sensor that can produce photos up to 64 MP resolution. Not only that, but the main camera is also equipped with EIS (Electronic Image Stabilization) so that it can be able to record videos with stability even when taken while walking or running.

The main camera can also record 4K video up to 30fps. While ultra-wide cameras can take photos or record videos with a wide area of up to 119 degrees. The combination of the main and secondary camera is able to produce Portrait photos instantly.

Furthermore, the camera can take a detailed photo of up to 4 cm away. Moving to the front, there is a 32 MP camera that can produce selfies seamlessly thanks to AI Beauty support.

The OPPO K5 also comes with NFC, dual SIM card support, 4G-LTE network, WiFi, Bluetooth, and ColorOS 6.1 based on the Android 9 Pie operating system. This Smartphone is sold with 3 variants

Huawei P30 Lite Why You Should Buy It