OPTIC AXCESS — Realme has just launched its first smartphone with a 64 MP camera called the XT Realme in India.

The main camera itself uses the Samsung ISOCELL Bright GW1 sensor which is capable of producing photos up to 64 MP resolution. However, using TetraCell technology (Quad-Pixel Binning) makes the main camera by default will produce a resolution of 16 MP with richer information so that the picture is sharper. 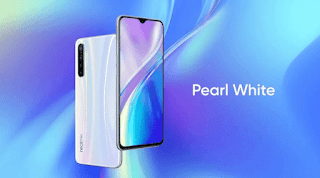 The main and secondary rear camera can produce (blurred background) photos instantly and neatly. While the ultra-wide camera allows taking photos with a large area to an angle of 119 degrees.

Furthermore, the rear macro camera can be used to take photos at very close range and very small objects. While the front camera has a 16 MP resolution with a Sony IMX471 sensor and f / 2.0 aperture that can accommodate selfies or video calls properly.

The kitchen is entrusted to the Qualcomm Snapdragon 712 Octa-Core chipset which is powered by the 10nm process technology. RAM with a choice of 4GB, 6GB, or 8GB and internal storage with a choice of 64GB or 128GB.

The hyper boost feature is still presented on this smartphone that can improve performance when the game is running. But if users feel the internal capacity is less relieved, they can add microSD up to 256 GB. 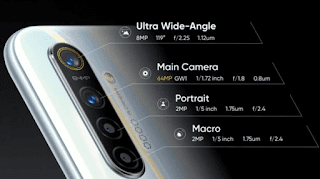 Although the screen meets the front, the waterdrop-shaped bangs are still at the top. In contrast to the realm of X the screen really meets the top with no bangs at all.

Not to forget, support for 4G-LTE networks, WiFi, Bluetooth, and ColorOS 6 based on the Android 9 Pie operating system has been embedded in it. This XT Realm itself comes with 3 variants consisting of: